Twelve days after Sens. Joe Manchin (D-WV) and Charles Schumer (D-NY) announced that they had reached agreement on a healthcare, climate and tax bill, the U.S. Senate on August 7 approved the Inflation Reduction Act on a party-line vote, with all 50 Democratic Senators voting for the legislation and all Republicans voting against it, and Vice President Kamala Harris casting the decisive 51st vote in favor.

The Senate’s final version of the bill – H.R. 5376 – includes a 15% corporate minimum tax on certain large corporations, a substantial increase in IRS funding, a 1% excise tax on corporate stock buybacks that was added during negotiations with Sen. Krysten Sinema, and a two-year extension of the section 461(l) loss limitation rules for noncorporate taxpayers, which is now set to expire for tax years beginning after 2028.

The House of Representatives is expected to return from its summer recess to vote on the Senate bill on Friday, August 12, 2022.  If the House approves the version of the bill passed in the Senate with no modifications, the bill would be ready for President Biden’s signature. Conversely, if the House makes any changes to the Senate bill, any differences would have to be resolved before sending the bill to the president for his signature.

The tax provisions included in the final bill generally adhere to the proposals first revealed by Sens. Manchin and Schumer on July 27, albeit with some significant modifications.

Perhaps the salient difference between the two versions of the bill is the removal, at the behest of Sen. Krysten Sinema (D-Az), of a provision that would have introduced an extended five-year holding period for partnership interests held in connection with the performance of services (“carried interest”) to qualify for long-term capital gain treatment.

To replace the estimated $14 billion that would have been raised through the changes to the carried interest rules, Democrats introduced a new 1% excise tax on stock buybacks that is expected to bring in an estimated $73 billion in revenue.

An “applicable corporation” is defined as any corporation (other than an S corporation, regulated investment company or a real estate investment trust) with three-year average annual AFSI that exceeds $1 billion. For these purposes, a corporation must calculate its three-year average AFSI without regard to financial statement net operating losses (NOLs) but with regard to certain specified adjustments to book income, to determine if the average in any year exceeds $1 billion. The specified adjustments include items related to related entities, foreign income, disregarded entities, federal income taxes, non-reasonable compensation, covered benefit plan amounts and tax depreciation.

In a last-minute addition that took some by surprise, the Senate added an amendment introduced by Sen. John Thune (R-SD) during the vote-a-rama process—during which senators may offer an unlimited number of amendments if they relate to the underlying reconciliation bill—that eliminated an expanded aggregation rule under Section 52 that would have applied with respect to the book minimum tax when there is partnership or investment fund ownership.  The bill authorizes Treasury to issue regulations or other guidance that create a simplified set of rules for determining whether a corporation satisfies the $1 billion test ($100 million in the case of certain foreign-parented multinational groups).

Arguing that the originally proposed rules would have snared many small businesses that accepted investment partnerships with private equity firms during the pandemic, Thune’s amendment precludes the application of the minimum tax to companies that reach the threshold because their income is combined with unrelated businesses under the shared ownership of an investment fund or partnership. 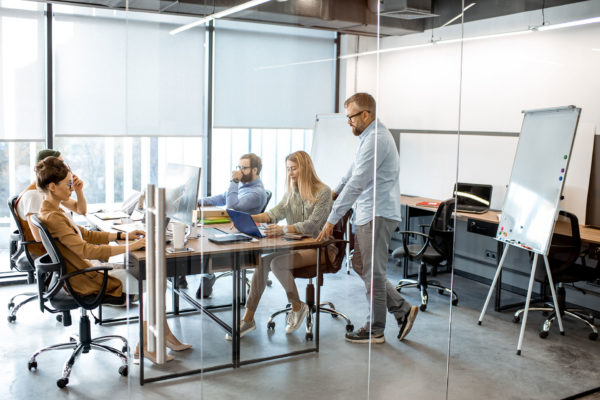 The Senate also extended the excess business loss rules under IRC Section 461(l) for two more years through taxable years beginning after 2028. This CARES Act provision was originally expected to sunset for years after 2025 until it was extended by one year by the American Rescue Plan Act. This latest extension is expected to raise an estimated $55 billion over 10 years.

The corporate minimum tax had also been modified before the vote – again at Sen Sinema’s request — to reduce the effect of some depreciation rules on companies that would be subject to the minimum tax. The bill now provides that adjusted financial statement income will be reduced by tax depreciation deductions while book depreciation adjustments will be added back to AFSI.

The 1% non-deductible excise tax would be imposed on the fair market value of any stock repurchased by a domestic corporation with stock traded on an established securities market. A “repurchase” is defined as a redemption under the U.S. Tax Code or other economically similar transaction, as opposed to a dividend payment to shareholders. The tax would apply to repurchases after December 31, 2022. The tax extends to certain affiliates of U.S. corporations, as well as specified affiliates of foreign corporations performing buybacks on behalf of their parent organization.

Some stock repurchases would be exempt from the excise tax, including tax-free reorganizations, repurchased stock contributed to a pension plan or ESOP, or when the total annual amount of repurchases equals $1 million or less.

Provisions Not in the Bill

The Senate bill does not include the modifications to the international tax rules changes, including amendments to the global intangible low-taxed income (GILTI) rules that would be necessary to bring the GILTI regime into conformity with the OECD’s Pillar Two and the 15% global minimum tax. It is not clear what the implications are for U.S. participation in the OECD’s global tax reform proposal.

Moreover, the bill does not include a provision to remove the itemized deduction cap for an individual’s state and local taxes and it does not provide for the reinstatement of the popular research expensing provision under Section 174 for research and experimental (R&E) expenditures.

Section 174 was amended by the 2017 Tax Cuts and Jobs Act to require mandatory amortization of R&E expenditures incurred in taxable years beginning on or after January 1, 2022. The capitalized Section 174 costs, including salaries of researchers, overhead expenses such as rent, depreciation, utilities related to facilities used for R&D, supplies used during the research process and certain software development costs are now required to be capitalized and amortized using a straight-line methodology over five years for costs incurred in the U.S. or 15 years for costs occurring outside the U.S.

Maner Costerisan is here to help you understand this Inflation Reduction Act and how it affects taxes!

You can reach us at maner@manercpa.com or by calling us directly.

What is a Business Valuation?

How To Handle Evidence in a Fraud Investigation at Your Business

How to Use Internal Controls to Prevent Fraud, Waste and Abuse While Improving Auditability

2022 Q4 Tax Calendar: Key Deadlines for Businesses and Other Employers

The Inflation Reduction Act: What’s in it For You?