The Specifics Of Tax Increment Financing

Tax increment financing (TIF) started in the 1950s as an urban renewal strategy and is now one of the country’s most commonly used economic development tools. Municipalities use TIF districts to fund capital improvement projects by capturing the increase in property tax revenue within the established TIF district.

State legislation allows municipalities to create four specialized organizations that can generate and use TIF revenues. While the duration and specifics of a TIF district vary from municipality to municipality and project to project, the basic concepts remain the same. 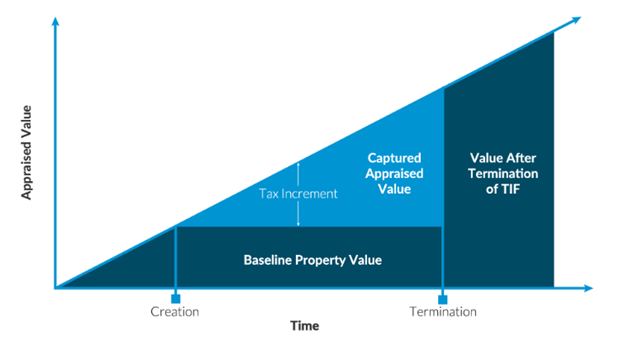 The governing body creates a DDA for the following purposes:

The governing body is only allowed one DDA. The governing body first identifies the area it desires to designate as a “downtown district” and finds that the above purposes are necessary within the district. Once the DDA has been established, TIF revenues can be captured on local property taxes (except schools). Captured revenues may only be used for projects within a development area of the identified district. The project must be for a public benefit and have an adopted development and tax increment financing plan in place.

TIFA was available before January 1, 1989, and has been replaced by the Local Development Financing Authority. TIFA districts created before 1989 cannot be expanded to include additional land.

TIFA districts were created for the following purposes:

Public facilities, including streets, plazas, pedestrian malls, and any improvements to that, including furniture, beautification, parks, parking facilities, schools, libraries, and other public institutions, are considered eligible projects and subject to a development plan.

The financial benefits of a TIFA are similar to those of a DDA. Establishing a TIFA allows the district to capture local property taxes (except schools). However, TIF revenues generated can only be expended within the development area and only for the improvements and public facilities outlined in the approved plan.

The LDFA replaced TIFA in 1989. A governing body can create one LDFA for the following purposes:

LDFA is to be used for the benefit of industrial property within the district, whose primary purpose is included in the following:

A significant difference with an LDFA is that governing bodies of other taxing authorities can exempt, by resolution, the capture of their taxes.

A municipality establishes BRA districts to generate financing to conduct environmental response activities to industrial or commercial properties in the community with environmental contamination. The goal is to revert such properties to productive economic use.

Municipalities can have multiple BRA districts and capture both state and local taxes under certain circumstances. For example, a BRA may establish a local site remediation revolving fund to hold excess captured taxes and later use those funds to conduct eligible activities at other properties in a zone established by the municipality.

Maner Costerisan is here to help you answer any questions regarding tax increment financing or any other question you might have concerning the topic.

We are here to help you!